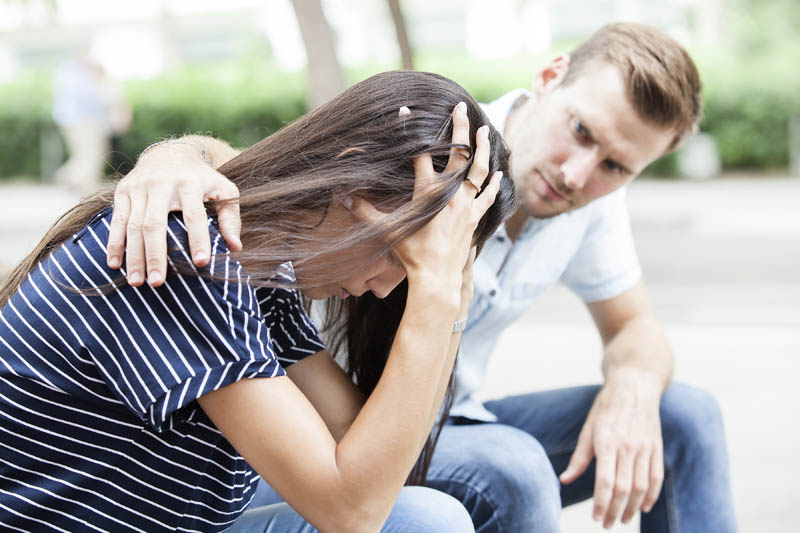 You can imagine the stereotypical person suffering from anxiety pacing continuously to and from the breadth of a room. On the other hand, a depressed person is moody, and exhausted to immobility. These stereotypes are a little far from the true nature of these mental disorders, but they serve to nonetheless make it seem impossible to imagine someone having both mental disorders.

Are anxiety and depression are the same?

How can one person be pacing about in worry, while moody and defeated at the same time. How can somebody have a perception of events that focus on the future as with Anxiety patients, while they focus on the past and present like patients of Depression. It seems improbable, but in reality – very possible. So are anxiety and depression linked? Read on!

In fact, it is a very common occurrence, as research results reveal that 7 out of every person going through depression also had problems with anxiety in 2017. In face of that truth, there’s a need to give a deeper explanation of how it goes all down.

Simultaneous Depression and Anxiety – How it works

What happens when a person experiences both anxiety and depression simultaneously is that the person exhibits the symptoms of both depression and anxiety at the same time. On that note, there are two main types of these mental health conditions, namely:

With MADD, there’s always an imbalance in which symptoms the person is feeling the most. The person might be showing signs of both anxiety and depression, but the person is feeling a greater deal of depression than anxiety, or vice versa. Knowing which feeling is stronger, is what usually guides the doctor in managing or treating the issue typically with medication.

Anxious Distress, on the other hand, has a fixed stronger connotation of depression. People recognised with AD usually:

The height of this anxiety easily passes the limits of control they have, and the person will usually withdraw into depression after a while. Also, in sleeping difficulty, irritability, and lack of focus, there are some common ground to be found between anxiety and depression. Anxiety can be perceived to be absent in many cases of people with depression, even though it is usually just waiting, ready to explode. Nevertheless, anxiety and depression have their fundamental differences.

Can depression lift on its own?

Momentary depression, for one, is absolutely normal following sad or unfortunate events so yes depression can lift on its own. When it becomes the status quo, or the default mental state of a person for a longer period than normal, then it progresses into a mental disorder. Depression is then discernible by:

Gastrointestinal problems without cause, as well as pains, cramps, and aches

Hopeless and sad feelings, as well as feelings of guilt

On the other hand, it is normal to feel anxiety moments before big performances, or before actions that have massive consequences. When it becomes a part of daily routine, and channeled to parts of daily living in such a way that it interferes with normal living, then it is a problem. You can mark by the following symptoms:

Feeling restless, or on edge

What causes the combination of depression and anxiety?

These two conditions have very similar stimulants. The presence or fulfilment of these common factors can lead into the simultaneous development of depression and anxiety. They include:

Interestingly, eating disorders have been discovered to occur at the same time as anxiety and depression. People feeling this dreadful mix of mental ill-health, usually stretch towards ‘comfort foods’ in a bid to regulate their helpless feeling and let go of some tension. A habit that quickly turns into a problem in its own right. So are anxiety and depression linked? It appears so.

Just like that, anxiety and depression can easily take a turn for the worse in unsuspecting people, which is why a visit to the doctor after two weeks of noticing the symptoms is recommended. Hopefully the doctor will come up with some treatment strategies to make sure that people feeling the effects of depression and anxiety can find relief in due time. In my experience though medication is normally prescribed. If you ask a psychiatrist are anxiety and depression linked they will almost certainly reply “Yes”.

Can anxiety be cured?

In addition, most people have taken to the following habits to improve their conditions:

This might not be a conclusive step for everyone, but it is important that people going through these situations realise that they are not going through their anguish because of something they did wrong. They need to accept that it is the symptom of the illness that is weighing them down, and they’ll soon be feeling better if they ride it out.

Instead of turning their attentions to food like takeaways and confectioneries that will give them temporary relief, it is good that they adopt foods with more nutritional benefits to their diets. A few veggies, lean meat and some whole grains will go a long way in protecting mental health.

You might not feel like doing any of the two, but their relationship means you need to get started one way or the other. Getting in a good workout ensures that you get feel-good hormones pumping through your veins, which automatically boosts your mood. At the same time, exercise also tires you out enough to make sure you can get enough rest to improve your immune, cardiovascular, and nervous conditions.

You can also take up relaxation measures like yoga, a massage or meditation to get your body back in a more positive tone.

Hypnotherapy for depression and anxiety

Of course, all of these measures pale in comparison to the effectiveness of Hypnotherapy.

In hypnotherapy, science provides an unmatched method of dealing with mental issues, such as anxiety and depression (or their union) by directly correcting the mental coordinates of the person’s subconscious.

Hypnosis has always been a curious spot in modern biology, and as far as modern medicine is concerned, Hypnotherapy makes the best use of this phenomenon. By instructing the mind to relax through hypnosis, us professionals can now pull the lever that alleviates the urge to worry, and replaces the weighty feeling with a calmer sense of clarity.

Thus, hypnotherapy in its essence, works to free the mind of the weights that pull it down to depression, and quickens it towards anxiety. The practice reminds the mind that there are some situations beyond control, and many more that can be controlled. This might push the person to appreciate the things that previously brought the person a feeling of ease – like movies, magazines or sports – which depression and anxiety had previously cast in shadows.

Normally in the UK, CBT and so many other psychosensory tools are used but hypnotherapy to its full effect, is more than enough to aid anxious or depressed people to getting a fresher lease on life.

What you can do if you have anxiety and depression

By combining hypnotherapy and my Thought Retraining we can re-establish control over their train of thoughts, and daily routines in people with anxiety and depression. The people experiencing depression and anxiety can also open themselves up to influence from strong relationships they can receive support and encouragement from, in order to persevere.

Rather than fighting the symptoms every day, hypnotherapy offers a chance for you to focus on what you should be doing – living your life.